Let’s start this article with a statement: a screenplay is not a movie. It is not a finished work but the outline of it, a movie project.

Its main function is to bring the future film to life in the reader’s mind, to produce images and sounds, while respecting key rules.

That is why writing and reading screenplays are two very different exercises. For the reader, it is about understanding a succession of descriptive sequences, often written in an abrupt way. You need a good ability of projection to be able to accurately read a screenplay. For the screenwriter, it’s about stimulating this mental projection in the reader, while conveying their vision as an author.

To this end, some screenwriters rely on one of the tools at their disposal: the layout..
In this article, I will study a recent example that seems particularly interesting to me: the first version of the scenario of A quiet place written by Scott Beck and Bryan Woods. 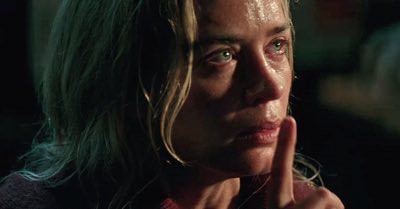 A screenplay is not a novel

“A screenplay is, at its core, the outline of the film in the making. The reader has to imagine how it will look and sound, how the actors will play it, what its rhythm will be.”
Yves Lavandier, Writing Drama

Put this way, we could suppose that it would be easy for a novelist to write a scenario. A novelist knows how to use words and knows how to put images into the readers’ heads. However, there is numerous examples of failed attempts for novelists to write good screenplays.

Philip K. Dick is one of them. In the preface to the published screenplay of Ubik (adapted from K.Dick eponymous novel), we discover that the screenplay was turned down because it had nothing in common with a screenplay. Director Jean-Pierre Gorin described it this way: “A lot of dialogs, but nothing relevant with how you are supposed to shoot a movie.” Gorin wanted to start his collaboration with Philip K.Dick by bringing him “a bit of his knowledge of the medium” and by that he meant that the writer had no clue about the craft required to write in that format.

As for Stephen King (who definitely knows how to write!), he wrote in the preface to the published screenplay for Storm of the Century: “And I would argue that what follows (and that you’ll see on your TV screen if you watch Storm when it airs) isn’t really a “TV drama” or a “miniseries” at all. It is a genuine novel, one that exists on a different medium”
Stephen King claims his screenplay is a literary object (publishing it is a step towards this statement), but seems to forget that the main function of a screenplay is to give birth to a TV show or a movie, thus to a complete work. Stephen King’s statement feels like a non-sense: his screenplay would be, at the same time, a whole work and the basis of another one?

If transitioning from writing novels to writing screenplays is sometimes complicated, it is often because novelists forget to view the screenplay as a movie project rather than a literary object. Therefore they take the risk that their screenplay is actually not a movie project. 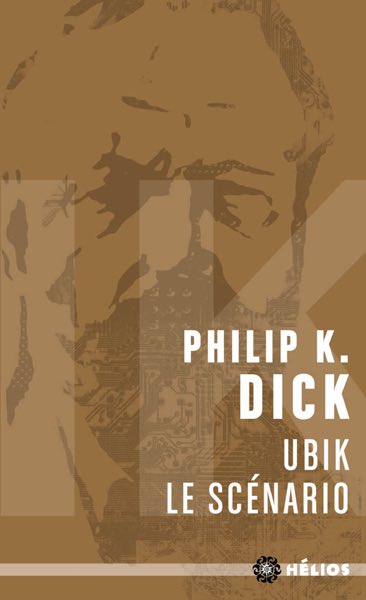 What you can find (or not) in a screenplay

When the novel, as a literary object, is fluid enough to play on the style or the layout, a scenario has a precise aim (to create a movie) and so has rules. We will focus on two of these rules (often found in screenplay manuals):

As we said earlier, the screenplay is intended to be a movie, that is to say an object that is both made of images and sounds. For example, a movie script should not contain the sentence “Jean wonders if he was right to come to that family meal” as it is a piece of information that cannot translate to the screen as it is. We would have to use a dialog, or some visual cue that would help the viewer understand that Jean regrets coming to that family meal…

For example, a screenwriter should avoid giving shot directions if they are not the director. However, as their job is to bring life to images in the reader’s mind, they are able to implicitly suggests it, if they write:

… A succession of close ups comes to the reader’s mind. We don’t know who this mouth belongs to, we don’t know where we are yet.
Inversely, if they write:

… The shots are different: we know it is Adam’s mouth, so there will probably be a shot in which the viewer can recognize him, especially as it is specified that he bites into the apple with delight. Another shot will be rather large, because the set is described, so we suppose it will appear on screen.
Some American screenwriters also use another specific layout to imply shots: a paragraph would be equal to a shot.

Keeping in mind those two rules, we will now go through some pages of A quiet place.

When the suspense is increased by the layout

Obviously, before the page layout, the suspense comes from the succession of actions. However, the layout can be an extremely useful tool to help bring this suspense to the page.

Take for example the page 39: 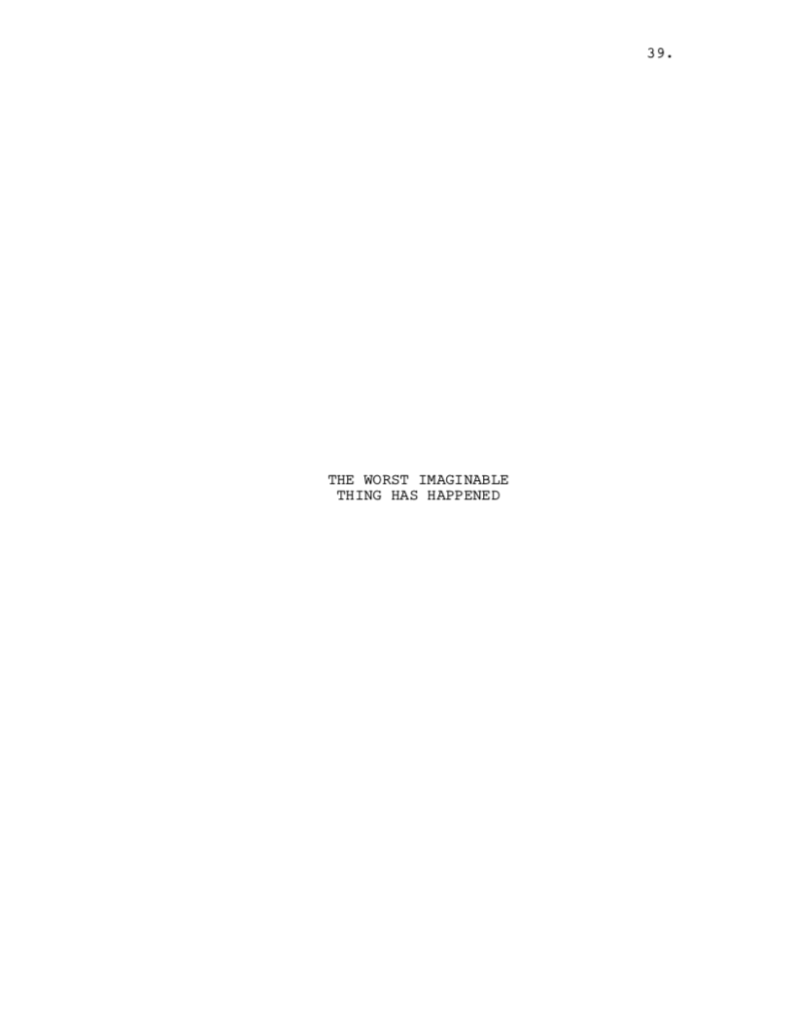 In the movie, this page won’t necessarily be transcribed by a latency, or an off-screen montage (it contradicts the two rules we talked about earlier though). It exists in the screenplay so that the reader can imagine how constantly terrified the characters are. This sentence implies the moment of blank in the characters minds, just as they discover something horrible. The reader is put in the same tense situation.

(Note : This script is the first version, written by Scott Beck and Bryan Woods. It was later re-written with John Krazinski, who directed it. This version is different from what you will see onscreen.)

The screenplay of A quiet place is rather short, because there is not a lot of dialogs. As a matter of fact, the characters have lived in complete silence for a long time. A creature, blind and sensitive to sounds, roams around their farm and is attracted by the slightest sound. They have learnt to live in silence, and they use other ways to communicate, dialogs are replaced by movements, objects or small rituals. 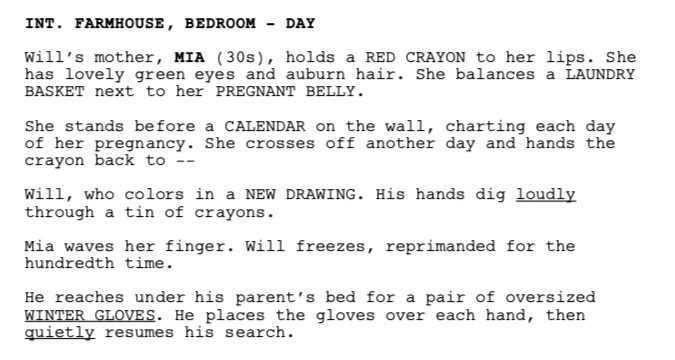 It’s one a of the first sequences of the movie. Will searches through his pencil holder, but he is too noisy, so his mother lets him know with a hand gesture. Will understands (because it’s not the first time) so he puts on gloves before rummaging again in the pencil holder, to be quieter.
It’s only page 2 and we already understand that sound is a source of tension. The screenwriters underlined sound elements (“loudly”, “quietly”) and the words that emphasize the relationship the family have with noise (“WINTER GLOVES”). 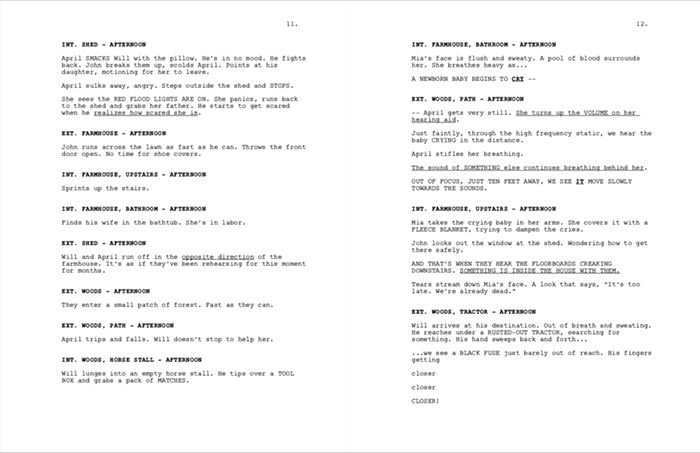 Following the same idea, we can read above the sequence about a baby’s birth. It’s page 12, still the beginning of the screenplay, and we already know how sound is dangerous. The sentence “A NEWBORN STARTS SCREAMING” pushes the tension further.

In this example, the layout seems more obvious and useless. It is the first page of a diary, written by a teen.
But in the screenplay, it is used to nurture the reader’s imagination with the childish handwriting, in purple pink. It tells a lot of things about the character beyond the text itself. 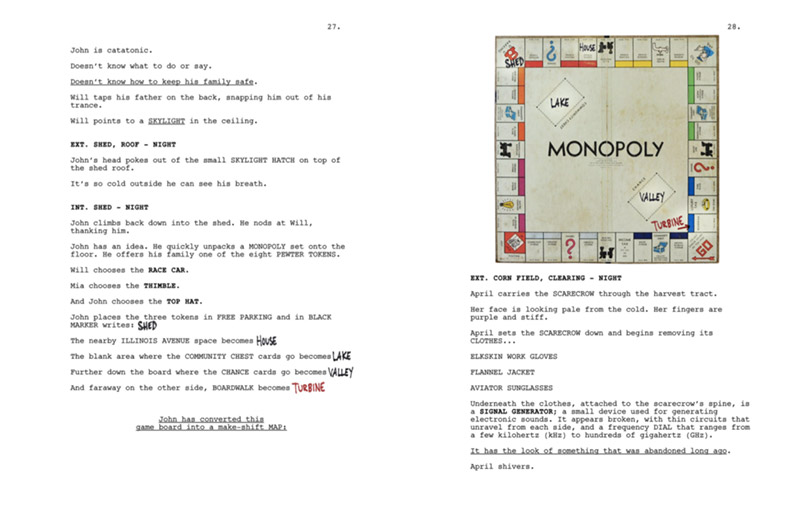 In the example above, the family communicates by using a Monopoly board game. The screenwriters chose to illustrate the position of the pieces on the board rather than explain it in text. It makes the reading easier, but it also helps the reader to understand the importance of that object for the family. This board game is a major conveyor of information. 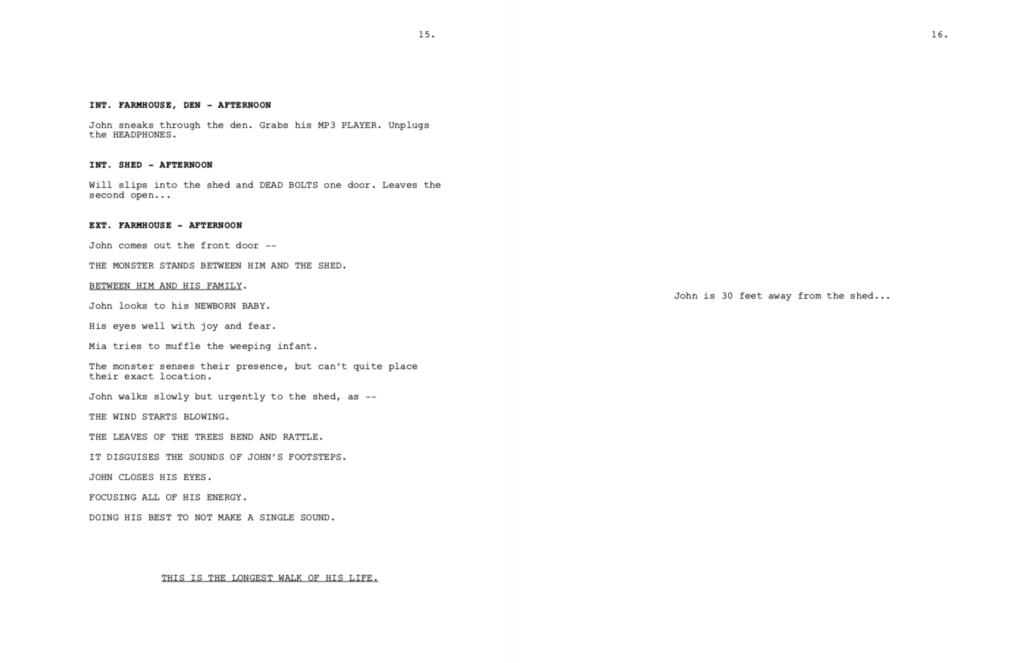 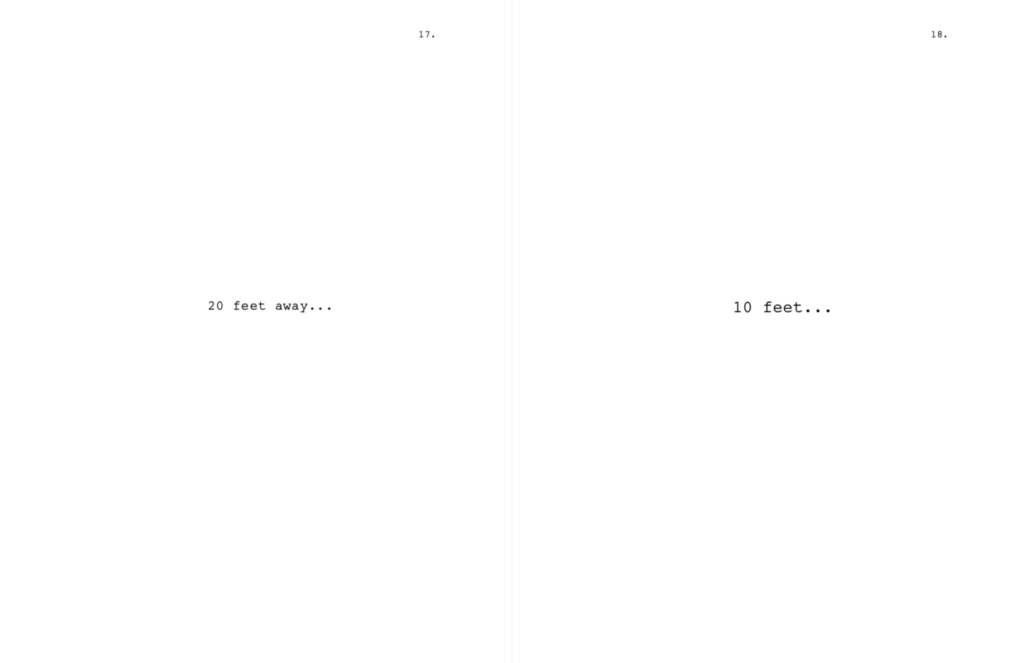 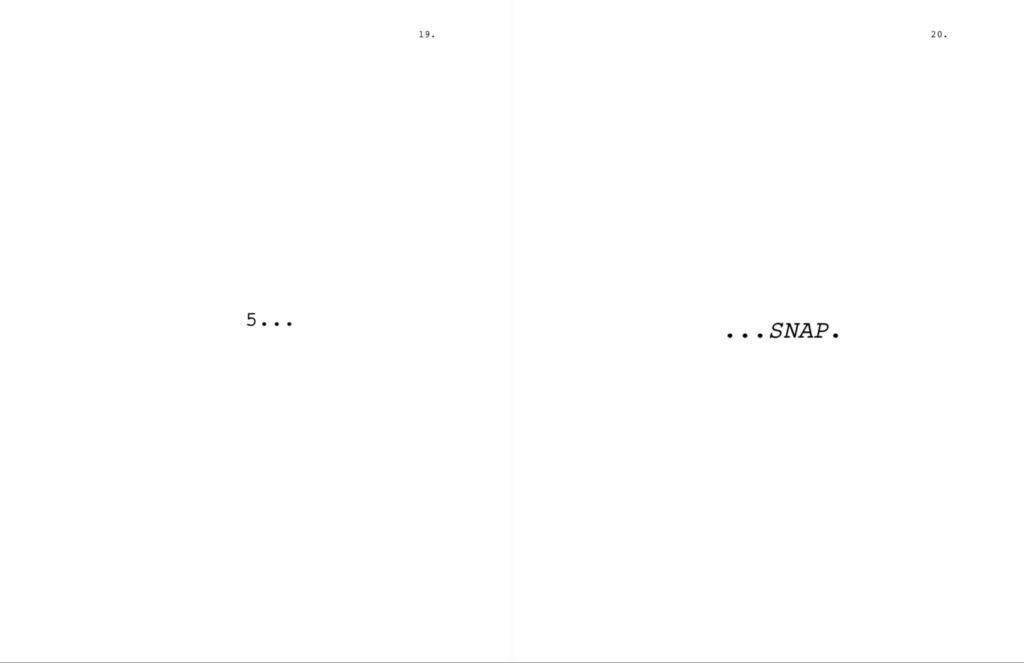 Once more, in this example, the distance the character travels while the creature is roaming takes several pages, to visually embody the length and the dangers of the journey. 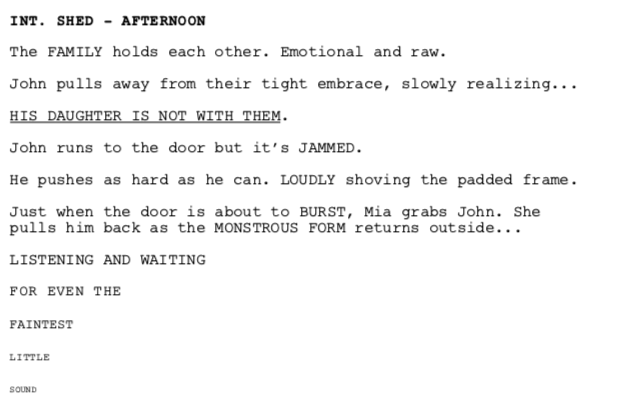 In this example, the importance of the sound volume is emphasized, rather obviously but also efficiently, by the sizing of the font. 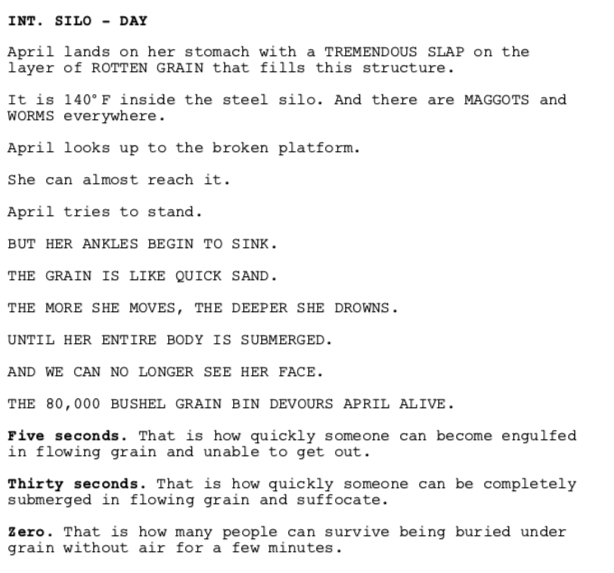 It is obvious that this information won’t make it to the screen. Neither by the image nor the sound, even less by subtitles or title cards. However, it helps highlighting the seriousness and the horror of the situation. The character is clearly risking her life, we have to feel it on screen as we feel it in the writing.

Same thing here, with the overuse of exclamation marks.

This last example is my favorite. In this extract, the characters are in complete darkness, that’s why the screenwriters decided to write it in a white font on a black background. But it’s not only for the sake of esthetics. It’s a way of foreshadowing what will happen at the end of the paragraph, when the main character thinks he is safe from the creature but realizes it can see clearly in the dark.
Once more, the suspense is intensified by the choice in the layout.

Breaking away from the rules

Clearly, the screenplay of A quiet place takes liberties with the two rules we discussed earlier. But it totally fulfills its primary function: to bring images and sounds in the reader’s mind, and to be the promise of a movie.

This screenplay is a particular example, it fulfills the requirements of the story. The layout helps to compensate for the lack of dialog, and thus avoids the use of long and redundant stage directions.
Beyond this specific case, it is essential to be inspired by this type of propositions. A screenplay that might work on screen but is poorly written is more likely to be misread. As screenwriters, after we learn the basic and essential rules of screenwriting, what if we were taught to offer a real reading experience?

The screenplay is a tool, let’s make it an effective one!